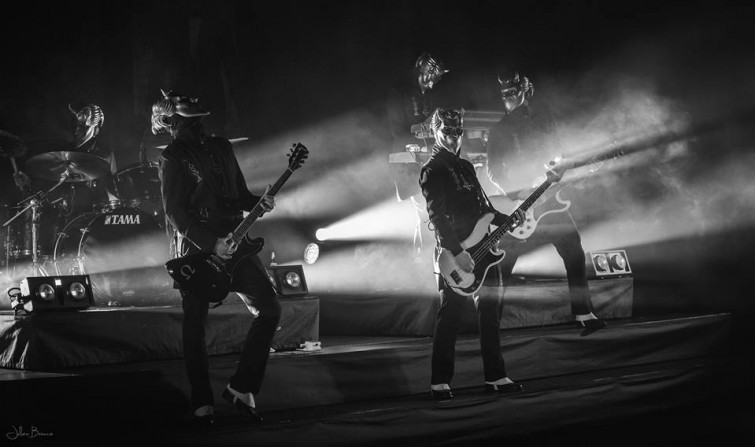 6056
2
By Prescillia
6 years ago
In Chroniques · Live report

Saturday, February 6 we were in La Rochelle (La Sirène) for an evening full in strong emotions . That evening, several events followed each other: our two interviews (with a Nameless Ghoul of Ghost and Anders, Dead Soul’s singer); the exhibition of Hellfest’s official pictures, a session questions / answers with Alexxx, communication manager of the festival and (eventually) Ghost gig.

Last saturday, we welcomed Dead Soul as the opening act for Ghost. This Swedish duet, composed of Anders Landelius, a charismatic blues man well known under the name Slidin’ Slim whose career is already quite busy and Niels Nielsen multi-instrumentalist, a prodigy of the electronic/alternative music.

Accompanied on this tour by the guitarist Jocke Eckstrand the trio has opened the evening. This tasty mix of styles gives a very unexpected result, Dead Soul is “another” kind of music; very original and somehow nothing you can compare to.

At first listen, Dead Soul may be surprising by its singularity, but soon you realize that this is the main charm of their music. At last, we can listen to something different, you just need to open your mind and let yourself discover an enchanting universe. As I was already admiring their music, seeing them live for the first time that night was a wonderful experience.

On stage, it emanates an atmosphere so atypical, Anders has a warm tone of voice and an incredible confidence. A lot of sensitivity is reflected through the lyrics, mostly inspired by the Blues themes, life experiences and scars ; like for example in “Shattered Dreams” “No need to crucify, just can purify, what is staying of These shattered dreams … “.

The band has played several songs from their latest album “The Sheltering Sky” for 30 minutes. On the track “The Fool” whose tunes are really rock inspired, the two guitarists Niels and Jocke unwinded their energy on their Fenders and gave another dynamic to the gig.

Even though they were only three on stage, from their performance emerged a beautiful energy. Songs such as “Do your job” punctuated the concert, conducted by the vocal strength of Anders while Niels was watching the audience intently when he was not behind his keyboards. It was a magical moment, that I also enjoyed because of the title “Lost my will” whose refrain still echoes in my heart “Lost my will, lost it along the way. Now I’ve reached the end, All I can do is pray. ”

Dead Soul is all about subtlety and originality if you want a touch of freshness it is really something to discover!

After waiting half an hour, the pressure stars to be felt, the public is impatient during the two tracks of introduction “Miserere mei, Deus” and “Masked Ball” (Jocelyn Pook). When Ghost finally arrives on stage, it is already intense. They took us on board directly with the song “Spirit”, so we are blown away, we get straight to the heart of the matter from the first minute. Papa Emeritus III appears, imposing on the top of the stage. From this moment, we know that the show is going to be very pleasant and eventful! Ghost immediately strings together with “From the Pinnacle to the Pit” whose bass line prompts the audience to fidget a little. The sound is very good, the drums are very powerful especially on songs like “Stand by Him”, “Clavi Con Con Dio” and “Per Aspera ad Inferi”, the gig is definitely wild! Papa leads his troops brilliantly in a certain theatricality, his charisma and his jokes are part of the show and create a strong bond between the band and its audience.

Ghost mainly plays songs from “Meliora” including the beautiful one “He is” sung in chorus by the audience. Ghost offers a Mass worthy of the name on the title “Body and Blood“, the usual Sisters of Sin come on stage to serve alcohol to people in the front row while Papa sings “His body and blood, Sharing in common, His body and blood, His body and blood, Serving Messiah, Son of God”.
The band then continued with an acoustic session with the track “If you have Ghost” to introduce the members of the band one by one. The crowd and the band are in total harmony, each musician has his place on stage and in the hearts of his audience.

The dynamics of the show leaps in another momentum with “Ghuleh / Zombie Queen” and “Ritual” before ending on the famous “Monstrance Clock” presented by Papa as a tribute to the female orgasm as he said: “after sweating for an hour and half it is about time to reach orgasm together”.

Ghost knows how to mix a powerful music with an incredible stage presence, compared to the first gig I attended in 2012 I must admit that the band has climbed many steps to reach its peak. Ghost now has all the ingredients to ensure its place among the best bands to see live! 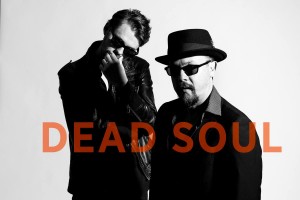 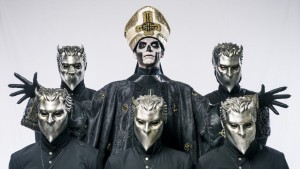 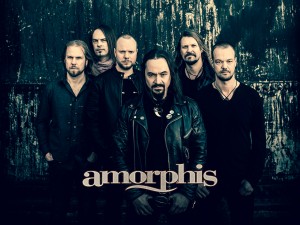 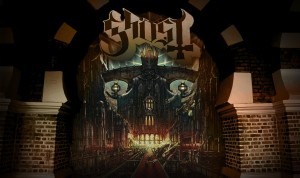